CricBuzz is undoubtedly the best app that keeps you updated with the latest scores and news about cricket matches around the world. It gives you the latest updates faster than other apps. And the best part is that this app tries to make up for missing out on watching the match. It is no wonder that this app has become one of the most loved sports apps in the country. And why would it not with the live commentary that it provides!

As I have already stated this app is amazingly useful and fast. But it is worthy of a mention that this app was chosen as the No. 1 sports app. This is the sole remedy to the burnt and aching hearts of the cricket fans who do not have the time to watch the match. And we all know how painful it is not to know what the score is at all times during the game.

CricBuzz has many functions. But the most importantly it is an app that keeps the live score of the ongoing matches.

The design is great, and all the different pages are easily accessible from the swipe menu. And all of the buttons and tabs are quite self-explanatory. Thus the user never gets confused within this rather complex app. The UI overshadows the complexity of the app and makes it user-friendly.

The list of content that you get in this app is vast. As I have already stated before, the most important content of all is the match live score. You get a ball to ball live commentary. And the speed of this app is so fast that there is no lag.

The list of games that CricBuzz covers is seemingly endless. ICC World Cup, ICC World T20, IPL, Champions League T20 and other international apps are all there. And along with these cricket series of international reputation, a lot of national level and regional level matches are also available.

Most of the user base of CricBuzz is from the Indian subcontinent. The analysts at the company arrived at this realization and decided to make the app transcend the limitation of language. The app was initially only released in English. But later the developers gave out an update that includes quite a few major Indian regional languages.

The live commentary that I have talked about in one of the previous sections is available in all of these different languages. The languages include Hindi, Bengali, Telegu, Kannada, Marathi along with English.

However, the developers have released an entirely different new application for the Indian languages.

The app gives live updates of matches. The live updates include ball to ball live commentary in the form of audio. Apart from this live audio commentary, there are also viewable updates. These updates are displayed in the same manner.

And all of these are there for you to see right on the display screen. Thus, CricBuzz kind of makes it up for missing out on watching the match live. 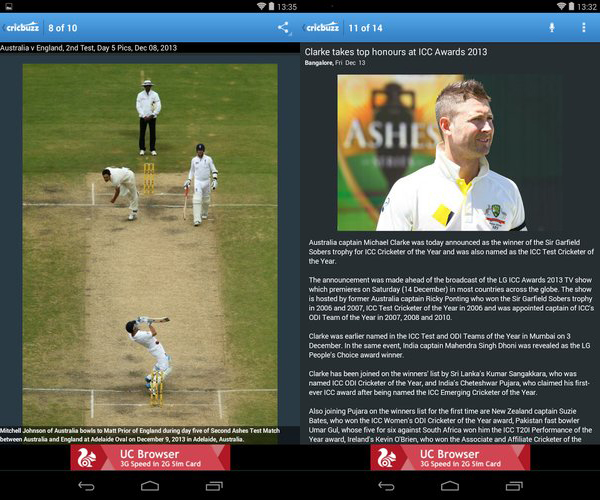 You can also set a notification for an upcoming game. It basically works like a pre-set task. Not only you get notified when the match starts, but you also get the live scores of that game sent directly to your mobile notification tab.

Not a single sports app is complete without having a news section. CricBuzz does not fall any short in this prospect as well. The opinion of the critics after a match is over is essential for that complete experience of watching and loving cricket.

Another feature that makes CricBuzz stand out from the others is the photo from those matches that accompany the scores. The developers are resolute to give the next best experience to watching the matches.

Another important feature is the gallery. The gallery has all the relevant information about the different teams and different players. And all of these can be found even without launching the app. There is a live widget that you can add to the home screen of your smartphone.

CricBuzz is one of the most popular sports apps in the Google Play Store. Installing the app is as easy as the breeze. Just follow these instructions as listed below.

Get the CricBuzz App Here.