There are myriad on online movie and TV show streaming apps available. But Popcorn Time is probably one of the most controversial ones till date. There have been issues with online movie streaming apps. Of all those issues the most prominent one is the issue concerning piracy. Paid services like Netflix and Crackle, they get their content legally. But the free movie streaming apps do not usually have any tie-ups with the entertainment houses. They get all of their content via other websites which keep pirated copies of the films and TV shows. However, Popcorn Time became the topic of such controversies due to the fact that they get the torrent link and stream the video from that link to the devices. This got the app removed from the iTunes app store. However, the app is still available through other websites and methods.

Even after the app was removed from the app store, it remained as popular as ever. Many apps followed a similar process. But none of these apps really stuck in the app store list for long. But despite all of these issues that were raised, it gained immense popularity among the users. Many even termed that this was the Netflix of the free apps. The fact that there was not, and still is not, any subscription fee only reinstates its user base. Let us now look at the features that resulted in this massive acceptance by the users.

Popcorn Time is the ultimate app that calls for you to get popcorns. It has a vast and extensive collection of films and shows. Name it and it is available there. It lets you stream all of those right on your Smartphone, be it iOS or Android. It has many features that are enough to make someone fall in love with the app.

As I have stated before, this app gets the .torrent file of the movie and streams it on the user’s device. Hence, there is hardly any limitation to what you can watch using this app.

On launching the app, you will get to see the latest and trending videos. You may also go to the Main Menu of the app and choose the kind of video you want to watch. You will find the most recent movies and episodes of series there. You will also find the comparatively old ones without much trouble.

The gallery is fully optimized for this application. There are broad categories like Movies, TV Shows, Cartoons which separate the different types of videos. And then there’s a content catalog that lists the films by their genres.

You may also use the search box to get the particular title you are looking for in a much faster way. 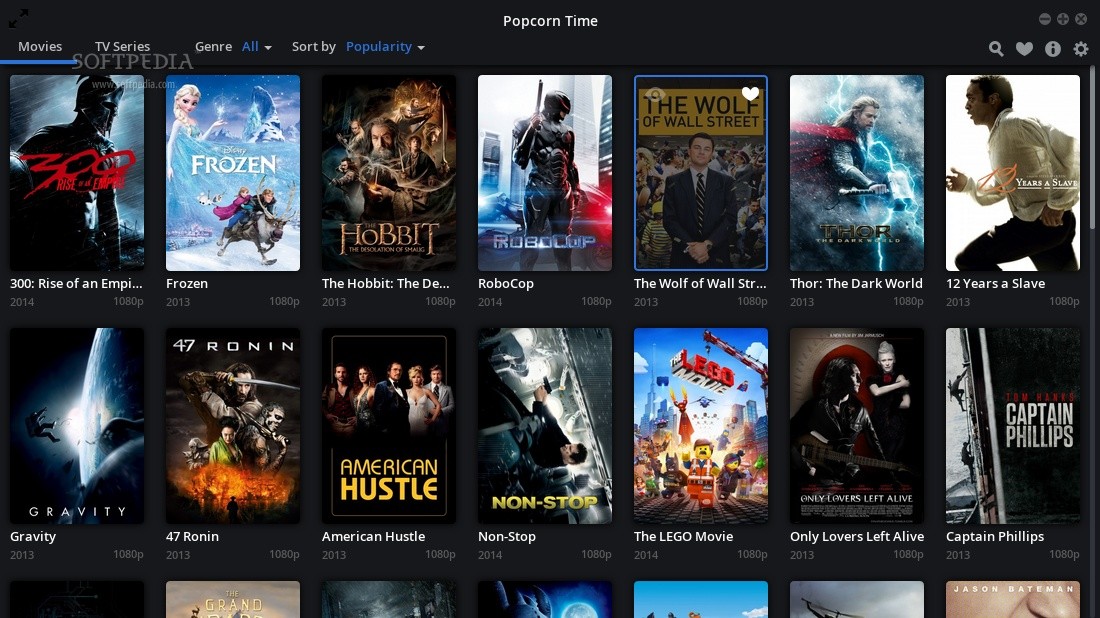 The best part about this app is its video player which has many advanced features. The videos can be played in the quality that you want right from the video player. The player also has options of playing the video at a faster speed. It even has an option to jump to a particular time of the file.

In addition to this, you can manually add subtitles to your video playback.

Often times, the app downloads the video you are playing on your device. It is advised to delete the temporary files frequently to avoid piracy.

This app, though is not available on iTunes App Store or Google Play Store, supports many platforms. It runs on Windows, Linux, OS X platforms along with Android and iOS devices.

This app can also be paired with Chrome Cast. Thus you may stream the video right on your Chrome Cast supported TV screen easily.

Popcorn Time is also available in most countries. The app supports more than 44 languages.

Now these are almost all the important aspects and features that you ought to know. Now let us see how to get this to run on Android phones and tablets.

How to Install Popcorn Time on Android Devices?

As Popcorn Time is not available on Google Play Store direct installation is not possible. Users have to download the apk file first. Then using this apk file, the app will install. This is a simple enough process, named sideloading. It does not require any knowledge about the software or anything. It just requires following a few steps. And that’s all. I am going to explain the process in three steps to make it even easier for you.

The first part is making sure that your Android phone or tablet is able to install the application.

*** Note the storage location of the apk file carefully.

It is really easy to install the app using the apk file. Just follow these simple steps I have mentioned below.

You may want to change the Device Administrator settings that we had changed back to what it was. But that is not necessary as it causes no harm.

That is all that there is to know about Popcorn time app and how to download the same on your Android device. Just make sure you have a stable and fast internet connection when you try to stream videos using this app. Also go through this comparative table, you might find it useful to make your decision.