Solitaire Arena has done a marvelous job and turned the classic solitaire game into a more engaging game fit for our generation. When I say fit for our generation I mean that it is developed in a way that it fits the choice of our internet savvy world. It is the same old game of Solitaire that you most probably have played thousands of time. Rockyou Inc. took up this game and gave it a complete makeover. Now you can play the game that you used to play against the computer against 7 competitors. And you can even play the games in real-time.

Yes, you read it just right. This game has been turned into a multiplayer game that you can play against real people in real-time. This interesting and age-fitting new property has turned the app popular among users across the globe. Every day the game gets a lot of hits on both their app and even from Facebook. If you want to know what makes Solitaire Arena so attractive then read this article. You will also find a complete and comprehensive guide on the process of installation towards the end of this article.

I have already stated that this game took up the age-old classic game of solitaire and revamped it. The rules of the game are still the same. Rules that are followed are that of the Klondike version of solitaire. The thing that changed is that now the users can play the game in a 8 people table. So basically you play against 7 people.

The user interface is really easy. The game was first released in the web version. The game received its fame mostly from Facebook. Later the app version was released. The app version is seemingly the same as the web browser version.

And the gameplay is also very easy. You just need to tap the cards. They automatically fill up the spaces where they are supposed to go. And you also have features like Hint, Undo. There are many other features too that make the game play much faster and swifter.

The best part of this app which makes the users go over their heels with this game is the Real- Time playing option. You can actually play against a real player in real time. The fact that the game is live makes it much more interesting the boring old version of the game. 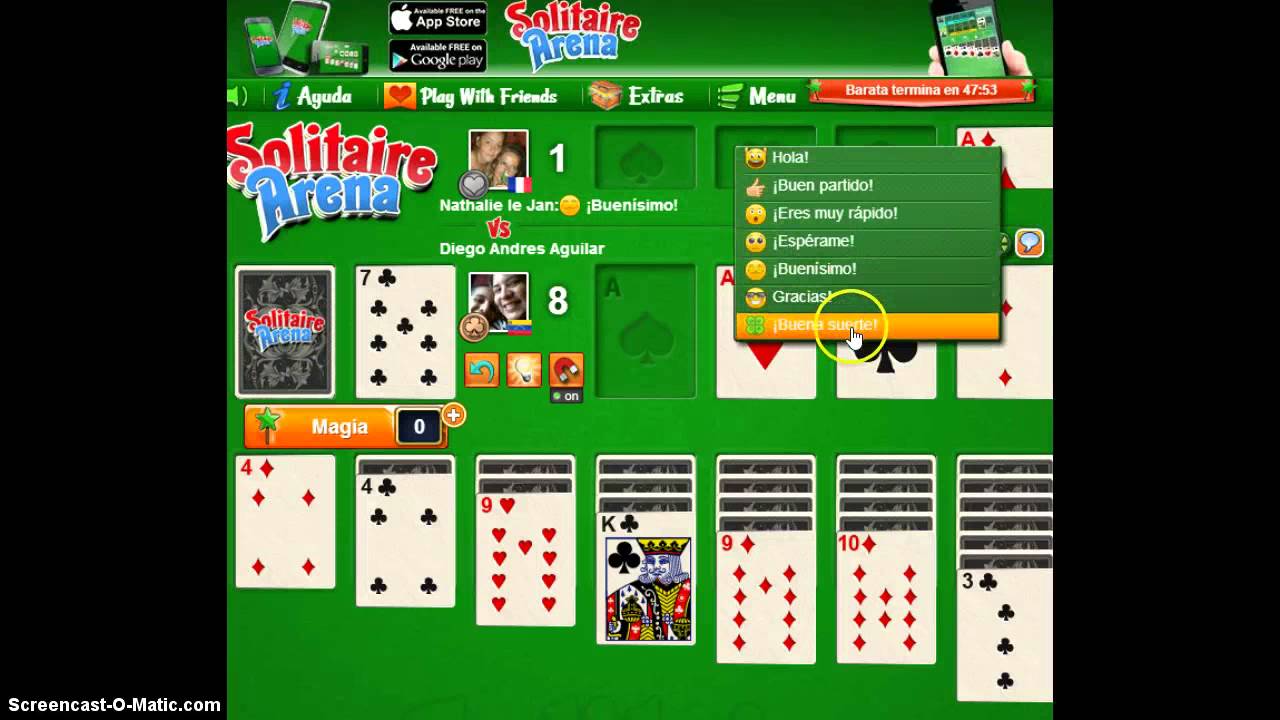 And to add to this, there are free 8 player tournaments all day long. So whenever you have some time to spare, you can play a game of solitaire on Solitaire Arena. The users get unlimited hints and undo options. You can drag and drop cards or just tap the cards to send them to their destinations. You can play the game in any way that you want.

And as you must have guessed, you can share the scores on social networking websites. I have already stated that the game saw the light of fame from Facebook. Now the app score can also be shared on other platforms like Twitter with a single tap.

Now if you want to install Solitaire Arena then read on to the next section of this article.

How To Install Solitaire Arena:

Solitaire Arena is offered by Rockyou Inc is available on all the official app stores. Irrespective of whether you have an iPhone or an iPad or iPod Touch or an Android mobile or tablet you can get this app with ease. You can find the app in both Tunes App Store and Google Play Store. Read to see how you can install the app on Android devices.

Get the Solitaire Arena App For Android Here.

You can add your already existing social networking accounts so that you can share the score. On the other hand, you may also play without adding any account. But in order to play the multiplayer real-time one on one game, you need to create a profile with the app server. That is all. So download the Solitaire Arena and get back to that timeless game of solitaire with a new twist!