9GAG is one of those names that you come across each time you open Facebook or Instagram. And more often than not this name comes teamed with some humorous image or GIF that leaves you with a chuckle. And in case you ever wondered what exactly 9GAG is, then know that this is one of those apps that will make you laugh no matter where in life you stand. Well, unless you are allergic to laughter, you should obviously give this a try.

If you haven’t noticed already those 9GAG images that you come across on social media platforms, have a huge viewership and likes, keep an eye on it the next time. The number of comments and likes is clearly indicative of how much people adore and admire the application, the website and the content that they post. Now that we have established the raging popularity let us take a look at the app now.

The name 9GAG was well noted much before the app was released. And to be precise, people had to wait for a long time before they finally got the app. This humorous service had started off as a website. Later it was released as an app only for iOS devices. Android users had to wait much longer to get hold of the app. Though the wait was excruciatingly long, it was worth it. The Android app was released later but with unique facilities. Unlike most other apps, this was not a copy of the app for iPhone and iPads. The Android app of 9GAG is unique in its own way.

9GAG is an app that gives the users access to millions of funny images, memes, and GIFs. The users get instant access to these apps that are bound to make a day. And that’s not all, the developers have also introduced a funny videos section. The main motto behind the company was to offer the people things that are funny so that they can laugh out loud. And they have achieved that goal so well.

The images include memes, hand-drawn comics, funny situational photos and much more. The gallery is so vast and varied that it is quite impossible to state the types. The one thing that stands true for all of the contents is that those are all funny and full of humor.

The User Interface is great and swift. It is much like the website itself. On opening the app, the users stumble upon the news feed that keeps flooding with new images and GIFs and videos. You can like and share the video. You can also post comments on them.

The only problem with the app is that you can not contribute to the community by posting pictures. You can only contribute as far as upvotes, downvotes and comments are concerned. But in order to compensate for this lack, you get community posts and comments. You can post pictures in the comments section. And trust you me, if your comment is hilarious enough it will attract attention from the other community members. 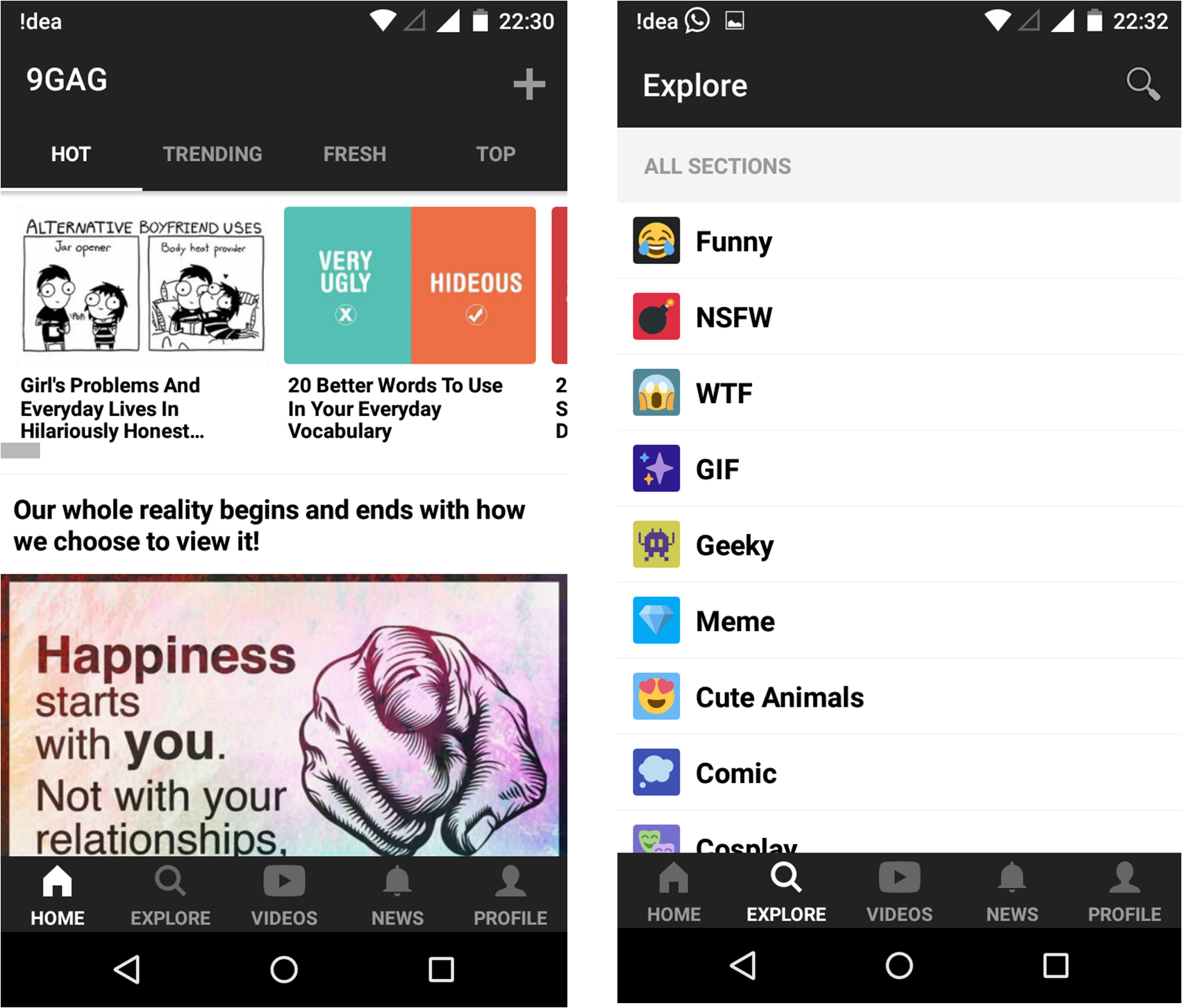 Is it safe to use:

9GAG is perfectly safe to use. But as the app has a large user base of people ranging from different status and different age group, the content are also varied. And there are contents that children are not suitable to watch. But the editorial team has perfected this feature in a way that it can not be done away with. In order to view those content, the user needs to sign in with his social media account. Thus the age of the user is ensured.

And there are contents for people of every age. The contents are too hilarious to keep the audience from laughing.

It is one of the prime concerns of the users these days. Sharing is considered to be one of the essential features of any app. And 9GAG does not fail the expectation of the users even in this matter. There is an integrated sharing button within the interface. The images, videos, GIFs can easily be shared on social networking sites like Facebook, Instagram, Twitter, Vine, Google + and others.

Now that we have gone through most of the important features of this app, let us see how you can get it to run on your Android device.

Get the 9GAG app here.

Laugh Out Loud with 9GAG!